The Making of Slavery Images

In a sense, the website began at Southern Illinois University, Carbondale (SIU-C) in the late 1980s. At the time, I was a Professor of Anthropology at SIU-C, and had introduced an undergraduate Anthropology course, which was to focus on the everyday life of enslaved Africans and their descendants in the Americas. At the time (as it remains today), this was not a conventional course topic in Anthropology. The course was first taught in the fall of 1988 and was given once, perhaps twice, afterwards. I attempted to illustrate every lecture with images, particularly those depicting the everyday life of the enslaved, a goal that was only partially achieved. Utilizing a variety of well known published secondary sources, images were selected and the help of SIU’s Learning Resources Services (located in Morris Library) was enlisted to produce slides of these images. I was naïve in approaching visual images of slavery in published works and to the sources from which they were derived. I had no other intention than to give the students some visual perspective on the topics discussed in class; no thought was given to the historical accuracy of the images or the sources from which they were drawn. The upshot of this is that about 100 to 150 slides were acquired; these formed the core of the website to be developed in later years. I retired from SIU in the fall of 1995 and moved to Charlottesville, Virginia to take up a fellowship at the Virginia Foundation for the Humanities (VFH), today Virginia Humanities. 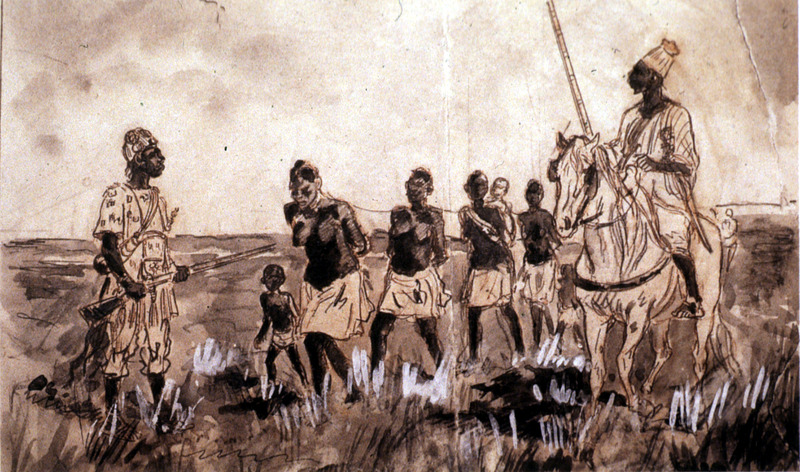 After several months at the VFH (Sept.-Dec. 1995), I returned to Southern Illinois and then came back to the VFH in Sept. 1996, this time staying eight months--until May 1997. During my first stint at the VFH, I had an idea for an NEH summer institute on the slave trade, particularly the middle passage, and during my second stay I approached Joseph Miller (a prominent historian of Africa, then on the faculty of the University of Virginia) and asked him to collaborate. Miller agreed and suggested a somewhat different, albeit related, focus for the Institute. We applied for a grant to do an NEH Summer Institute for College Teachers. With their support, the Institute took place for four weeks during the summer of 1998 at the VFH and co-directed by the two of us. During the Institute, “ROOTS: the African Background of American Culture Through the Trans-Atlantic Slave Trade,” I gave a slide-illustrated lecture, using some of the slides that had been collected earlier at SIU-C; this lecture focused on the lives of individual enslaved persons for whom I had images and biographical information from primary or secondary sources.

Someone, I no longer remember who (though it was probably Miller or a student in ROOTS), suggested that the whole slide collection should be scanned/digitized. At the time, I did not fully understand what this meant, but I was directed to Michael Tuite, director of what was then called the Multimedia Resource Center and later, when it joined UVA’s library, the Digital Media Center (Tuite, with a PhD in Earth Sciences, left the Digital Media Lab in late 2006 and as of this writing is on the staff of the Jet Propulsion Lab, California Institute of Technology). (The Digital Media Lab was shut down in 2015 during a reorganization of the library.) Tuite scanned/digitized the slides and suggested creating a database and then a website to bring the images to the attention of a wider audience. Thus, the website or idea of the website was born. This was around late 1998 or early 1999, and in September 2000 the website was launched with about 150-200 images arranged in 10 categories. 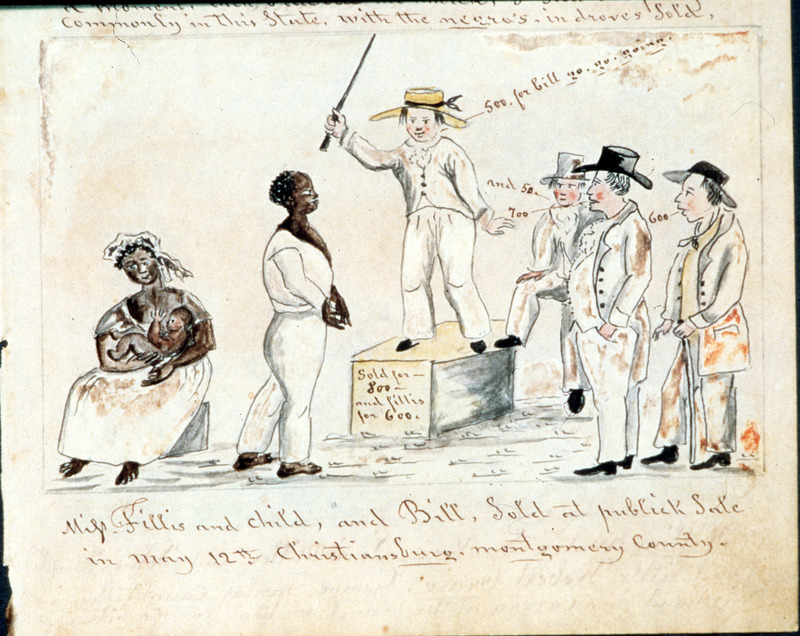 Miss Fillis and child, and Bill, sold at publick sale in May 12th, Christiansburg, Montgomery County

Initially, neither Tuite nor myself had a clear idea of what we wanted to achieve, but the site continued to grow. By Nov. 2001, it contained close to 300 images; by spring 2002, 500 images. By August 2006, the site had grown to 1,200 images, by November 2010, 1,275, and in March or April 2011, it reached about 1,280 images, arranged into 18 topical categories, the number it has today. It should be stressed that the categories are not mutually exclusive, and many images could fit into several categories. Although the metadata are regularly revised and edited (up-dates are clearly indicated on the front page of the site as well on individual images), no additions to the database are planned. The database initially used was Filemaker but a few years after the site’s launch, MySQL was substituted.

In January 2007, the site took on its present domain name www.slaveryimages.org. It has a wide and geographically diverse audience, both in North America and abroad. The largest block of visitors are in the United States, but others range as widely as from Western Europe, including the United Kingdom, to Russia, South Africa, and Australia. Users include college/university teachers giving PowerPoint lectures in their classes, teachers in secondary schools, scholars publishing books or articles or giving lectures/talks at conferences, book publishers seeking images for their publications, museums wanting images for exhibitions, TV channels producing documentaries on subjects related to slavery, and lay persons interested in slavery or the history of their families.

From the very beginning of the site there was a clear division of labor between Tuite and myself. He was entirely responsible for the technical aspects of the website: he designed it, built it, maintained it, uploaded images, converted jpg’s into tiff’s, did trouble shooting, etc. From a technical viewpoint, the site is his.

On the other hand, I was responsible for the “scholarly” portion of the website. I located the images through research in scores of libraries and archival repositories (a significant percentage of the images were acquired at the University of Virginia Library [its own holdings or through interlibrary loan], The John Carter Brown Library, the Library Company of Philadelphia, and the Library of Congress). I selected the images to be placed on the site; obtained permission, when necessary, for their use; arranged for their scanning or photographing at the repository; wrote the textual material (metadata) accompanying each image; and developed the topical categories in which the images were organized (see section “Explore the Collection”). I continue to update the metadata when new information comes to light, when viewers offer suggestions or spot errors, or when scholarly publications appear that are relevant to a particular image.

The site was never intended to be exhaustive regarding African life in the Americas, but rather selective in the images chosen. And users have continually been encouraged to write if they could correct or amplify any of the metadata.

Of fundamental importance throughout the development of the website was the inclusion of accurate bibliographic information. This was essential. And this accuracy was mandatory so that scholars or others could trace individual images and judge their value for their own purposes. Every effort was made to identify original sources of images published in secondary works or shown on commercial or other websites. It was discovered early in the research that commercial photo sites can frequently be unreliable when citing, even if they bother to do so, sources used in their slavery images; and authors/publishers who use these images compound the errors when they uncritically depend on such sources  (for example, J. S. Handler and A. Steiner, “Identifying pictorial images of Atlantic slavery: Three case studies.” Slavery & Abolition 27 [2006]: 49-69). 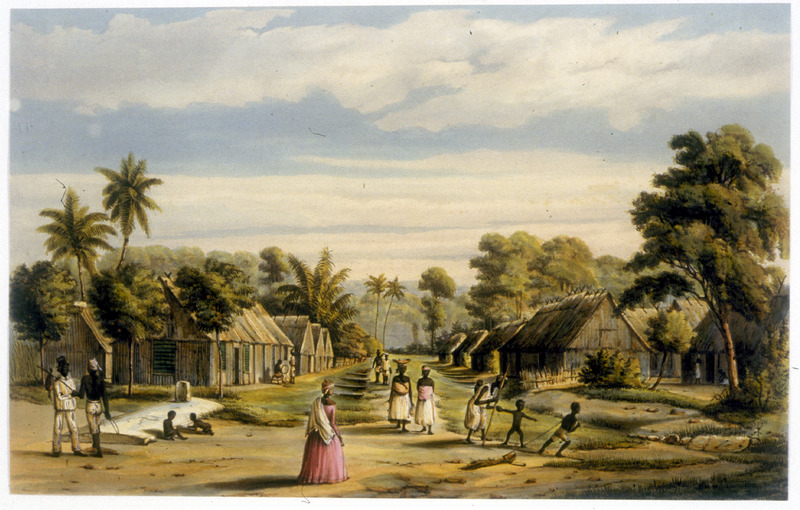 In the early phases of the site’s development, several criteria guided the choice of images. The fact that I am a cultural anthropologist very much informed these criteria. The criteria were subjective and often arbitrary, and shifted over time. However, certain criteria were constant.

Over time, other considerations were applied:

For many years, the website was on a server at the University of Virginia Library, but this server was increasingly aging and was phased out of commission. The site was then transferred in early 2016 to a server utilized by the Virginia Humanities.

* Many thanks to Professor Paul Lovejoy who encouraged me to write this account and offered his comments for improvement. Also to Will Rourk, Miya Hunter, and Professor Joseph Miller for their assistance in helping me with “memory issues.”