Arguably the best known visual depiction of African American life during the 18th century, this small (approx. 12 x 18) watercolor depicts what appear to be plantation slaves dancing and playing musical instruments. The artist did not name the painting, but former owners gave it the arbitrary title The Old Plantation by which it is now commonly known. The painting is unsigned, undated and not given a provenience. Recent research by Susan Shames, the decorative arts librarian with CWF, has identified the artist as John Rose, a South Carolina plantation owner. The painting was probably made around 1785-1790, and may depict a scene somewhere on the Coosaw river, in the area of Beaufort.
The central male figure holds a long staff or walking cane. The two women in the center are dancing with what appear to be scarves or bandanas, but in fact may be African musical instruments -- gourd rattles enclosed in a net into which hard objects such as shells or bones have been woven. On the right a man plays a 4-stringed banjo; another uses sticks or bones to play a small drum, possibly an inverted earthen ware vessel or a gourd /calabash. Except for the head ties (head kerchiefs) and bare feet, the male and female clothing conforms to late 18th colonial working class styles, regardless of racial group. Some of the men wear earrings and several seem to be depicted with beards, both common among enslaved South Carolinians. Three containers in the lower right foreground include a brown jug, probable stoneware, and a glass (wine?) bottle; the third object could be an English white salt-glazed stoneware jug or an English creamware jug. Whether all of these items would have been found at an actual dance and placed in this manner is problematical. The background shows a river with two canoes (?), and a group of larger buildings, including the manor or mansion house, outbuildings, and a row of seven (presumed slave) cabins at a short distance from the former. The cabins appear to have wooden or clay chimneys, features that sometimes appeared on slave houses in later 18th century South Carolina plantations. The two structures in the foreground suggest the scene represents a dance in the slave quarter. A male on the extreme left appears to have his hand over the breast of the female sitting next to him, and a man on the right (behind the banjo player) may be leering at the adjacent woman.

Although there has been a great deal of speculation as to what the dance scene is supposed to represent, nothing can be said about it with certainty or what was in the artistís mind when he painted it, including the sexual references. It is likely that the scene represents a composite view of activities, behaviors, and objects the artist had observed from time to time. In any case, the picture of slave life conveyed in this painting is bucolic and idyllic, surely masking the grim, severe and often brutal life of plantation slaves in 18th century South Carolina.

The history of this painting at CWF and the identification of its probable artist are discussed by Susan Shames, The Old Plantation: The Artist Revealed (Williamsburg, VA, 2010); for other details, see Jerome Handler, The Old Plantation Painting at Colonial Williamsburg: New Findings and Some Observations (the African Disaspora Archaeology Network Newsletter, December 2010 http://www.diaspora.uiuc.edu/news1210/news1210-3.pdf .

Image is in the public domain. Metadata is available under Creative Commons Attribution-NonCommercial 4.0 International. 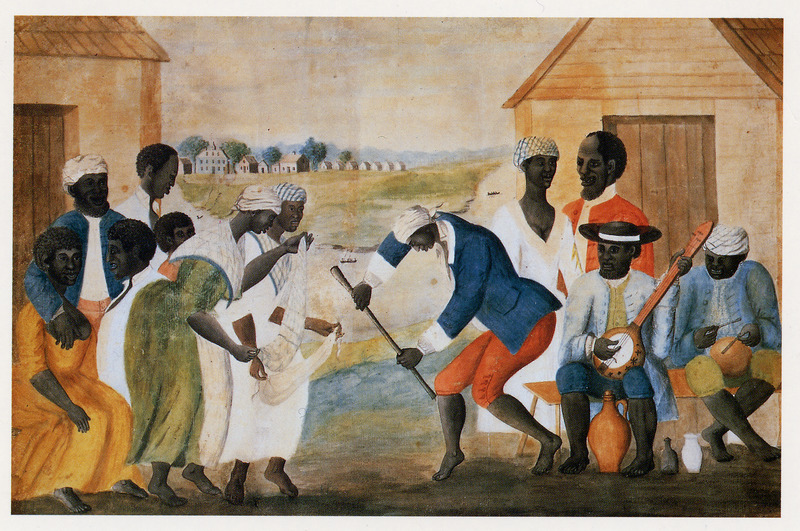